This is what my beer cellar looked like just one year ago. To put that in perspective, I didn’t start cellaring beers until I started Two Brews, and we had just celebrated our 2nd Anniversary last December. You can do the math.

It reminds me of something I once read, something from the mouth of Hunter S. Thompson. To paraphrase a demented and famous man, “Once you get locked into a serious collection, the tendency is to push it as far as you can.” 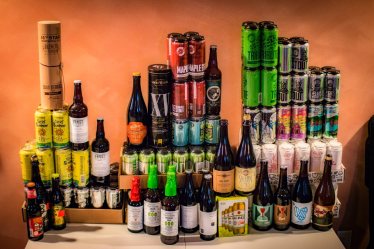 The road to the perfect beer has a multitude of variables. From my own attempts at home brewing I now have an eternal well of appreciation that brewers can ever land on beer that taste so darn good.

The flavors, aroma, appearance, and mouthfeel all are dependent on what water, grains, hops, and yeast you use. The fact that if you ferment your beer just 3-5 degrees outside of your target, or for that matter, keeping the temperature stable, you’ll end up with a different beer than you set out to make. My point is, there is a lot of nuance that goes into making a great beer.

You can only imagine my utter disbelief in discovering you can take a beer you like, put it in a cool cellar for 12-18 months, and it comes out better than before. WHAT IS THIS MAGICAL SORCERY?!

This discovery came at a good time for me as I was starting to run out of places to put my beer. Taking select candidates and putting them into a cool cellar seemed like a fun way to play with the collection. However, this created a monster.

So when I began, it was my “beer closet” as I didn’t have a cellar at the time. Temperature control was a real problem, but it was either that, or make a grim choice between having a refrigerator packed full of beer, or a healthy relationship with the wife. I think she appreciates my decision.

At the time, I was pretty much sticking any good beer I enjoyed into the closet, thinking, “If it tastes this good now, imagine a year from now!”. Turns out, this was an uneducated decision. All the beer in the picture above moved with me from Vermont to Ohio. Not all of it aged all too well (Minus the IPA’s and stuff, drank those right away!).

Since committing some faux pas of the craft beer cellaring world, I’ve since figured out you really want to stick to cellaring beers above 8% ABV to really play it safe. Not all beers need to be cellared. Some beers you buy are mildly infected and still drinkable, but after a year… they can be VERY infected.

Those are just a few tidbits I learned from the process. However, none of that is even the “monster” as to which I referred to earlier. Perhaps my issue was more personality based, but I had the “No… not just yet” syndrome.

I get to the beer cellar, open the door, and start to deliberate. “How about that bourbon barrel coffee stout? Nah, just got it a few months ago. Perhaps this barleywine? Naw, saving that for when I have people over. Maybe it’s time to break out that mead my buddy made… except it’s a Wednesday night…. and I’m at home, alone.” I just couldn’t do it. No beer seemed appropriate. I’ve done this dozens of times, only to head to the beer fridge and grab a year round available brew.

I basically created a collection of beers that are intended to be consumed, and never having a “good enough” reason to break any of them out. So they just sat there… until one day, when I had enough, I took action.

I sold them all.

Yep. I ripped the band-aid off. I got rid of all (nearly) all of it. It was just a money pit. A delicious one, but a money pit at that. I found myself spending more money than I should each week to simply put overpriced beer into a dark room that no one would ever go in to, and nothing would ever come out of. I had reached a point where I could stop buying beer that very moment and still have enough to drink for easily over a year at a reasonable pace.

This had a magical side effect. That liberation broke my attachment to the beer I had cellared. I decided to start “beer cellar 2.0”, only this time, I was going to put beer in there at a much slower pace, and be much more selective in what I put in there.

If there’s any advice to anyone out there that wants or has a beer cellar: Take it slow, be deliberate, and don’t rush. Most importantly, don’t be afraid to grab a “gem” once in a while, it’ll be good for you. To quote Mr. Hunter S. Thompson once more, “Good people drink good beer.”

Now to figure out how to buy less beer whenever I go to Vermont… but I’ll save that for another time.